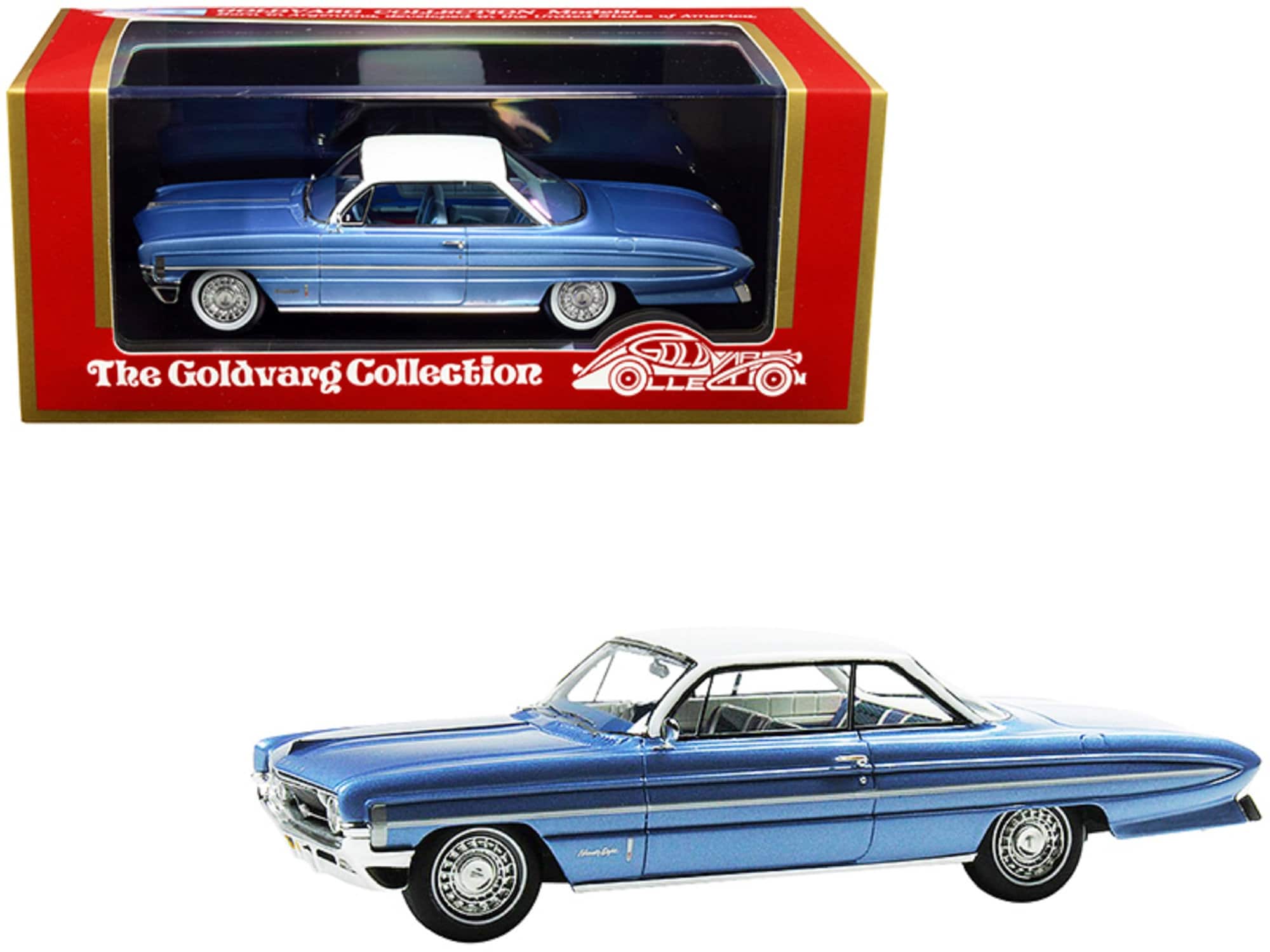 Brand new 1/43 scale car model of 1961 Oldsmobile "Bubble Top" Light Blue Metallic with White Top Limited Edition to 235 pieces Worldwide model car by Goldvarg Collection.
Brand new box.
Real rubber tires.
Officially licensed product.
Highly detailed interior, exterior.
Comes in plastic display showcase.
Dimensions approximately L-5 inches long.
This model is made of resin and does not have any openings.
Oldsmobiles were first manufactured by the Olds Motor Vehicle Co. in Lansing, Michigan, a company founded by Ransom E. Olds in 1897. In 1902, the company produced 635 cars, making it the first high-volume gasoline-powered automobile manufacturer. (Electric car manufacturers such as Columbia Electric and steam powered car manufacturers such as Locomobile had higher volumes a few years earlier.) Oldsmobile became the top selling car company in the United States for a few years around 1903-4. Ransom Olds left the company in 1904 because of a dispute and formed the REO Motor Car Company. In 1937, Oldsmobile was a pioneer in introducing a four-speed semi-automatic transmission called the "Automatic Safety Transmission", although this accessory was actually built by Buick, which would offer it in its own cars in 1938. This transmission features a conventional clutch pedal, which the driver presses before selecting either "low" or "high" range. In "low," the car shifts between first and second gears. In "high," the car shifts among first, third and fourth gears. For the 1940 model, Oldsmobile was the first auto manufacturer to offer a fully automatic transmission, called the "Hydramatic", which features four forward speeds. It has a gas pedal and a brake—no clutch pedal. The gear selector is on the steering column. Starting in 1941 and continuing through 1999, Oldsmobile used a two digit model designation. As originally implemented, the first digit signifies the body size while the second represents the number of cylinders. Body sizes were 6, 7, 8, and 9, and six- and eight-cylinder engines were offered. Thus, Oldsmobiles were named "66" through "98". Oldsmobile entered the 1950s following a divisional image campaign centered on its 'Rocket' engines and its cars' appearance followed suit. Oldsmobile's Rocket V8 engine was the leader in performance; its cars were generally considered the fastest on the market; and by the mid-1950s their styling was among the first to offer a wide, "open maw" grille, suggestive of jet propulsion. Oldsmobile adopted a ringed-globe emblem to stress what marketers felt was its universal appeal. Throughout the 1950s, the make used twin jet pod-styled taillights as a nod to its "Rocket" theme. Oldsmobile was among the first of General Motors' divisions to receive a true hardtop in 1950 called the "Holiday coupe" (Buick's version was called the "Riviera", and Cadillac's was called the "Coupe DeVille"), and it was also among the first divisions (along with Buick and Cadillac) to receive a wraparound windshield, a trend that eventually all American makes would share at sometime between 1953 and 1964. New for 1954 on 98 coupes and convertibles (Starfire) would be front and rear "sweep cut" fender styling, which would not show up on a Chevrolet until 1956 and not until 1957 on a Pontiac. In 1959, Oldsmobile models were completely redesigned with a rocket motif from front to rear, as the top of the front fenders had a chrome rocket, while the body-length fins were shaped as rocket exhausts which culminated in a fin-top taillight (concave on the 98 models while convex on the 88 models). The 1959 models also offered several roof treatments, such as the pillared sedan with a fastback rear window and the Holiday SportSedan, which was a flat-roofed pillarless hardtop with wraparound front and rear glass.

0 items in your cart